(Bloomberg) — The coronavirus outbreaks in Florida and California showed signs of easing. U.S. House Speaker Nancy Pelosi indicated that Democrats might cut their economic stimulus proposal to seal a deal for a Covid-19 relief package. Finland’s prime minister is being tested for coronavirus, while Germany’s chancellor ruled out any […]

(Bloomberg) — The coronavirus outbreaks in Florida and California showed signs of easing. U.S. House Speaker Nancy Pelosi indicated that Democrats might cut their economic stimulus proposal to seal a deal for a Covid-19 relief package.

Finland’s prime minister is being tested for coronavirus, while Germany’s chancellor ruled out any further easing of restrictions after a recent surge in cases. The U.K., Europe’s hardest-hit country, reported the lowest tally of deaths in 20 weeks. The World Health Organization warned against vaccine nationalism.

Hong Kong’s government will roll out a third round of anti-epidemic measures, Chief Executive Carrie Lam said. A flareup in South Korea continued to grow, with 246 more cases reported Tuesday, and the country banned large gatherings in and around Seoul.

Global Tracker: Global cases top 21.8 million; deaths pass 774,000Mystery grows over whether virus spreads through food packagingUNC calling off in-person school seen ‘clear as day’ by studentsVirus rages in South America with governments grasping for cluesFlu season is test run for U.S. Covid-19 vaccine campaignVaccine Tracker: Where we are in the race for Covid-19 protection

Subscribe to a daily update on the virus from Bloomberg’s Prognosis team here. Click CVID on the terminal for global data on coronavirus cases and deaths.

The University of Notre Dame said it will suspend in-person classes and shift to remote learning for the next two weeks because of a “steady increase” in virus positivity rates.

The Indiana school, with almost 12,000 students, said 147 people have tested positive since Aug. 3. Many were seniors who lived off campus and spread the virus at gatherings, according to the university’s website.

The move comes a day after the University of North Carolina at Chapel Hill, one of the biggest colleges to attempt in-person learning, said it would shift to online classes because of a spike in cases.

Texas’s new-case count climbed by 7,282 on Tuesday to 550,232, according to state health department data. The increase was almost triple the day-earlier addition, though Monday tallies tend to be the smallest of the week because of a falloff in weekend testing. There were 216 new fatalities, bringing the cumulative total to 10,250.

The positive-test rate dropped for the fifth time in six days, reaching an eight-week low of 11.18%. Controversy has swirled around the positivity rate for the past week after the figure surged above 24%, prompting criticism of the state’s methodology.

Coronavirus cases in the U.S. increased 0.8% as compared with the same time Monday to 5.46 million, according to data collected by Johns Hopkins University and Bloomberg News. The increase was lower than the average daily gain of 0.9% over the past week. Deaths rose by 0.5% to 171,120.

Arizona reported 915 infections, a 0.5% rise that brought the total to 194,920. The gain matched the 0.5% average increase of the prior seven days. The state counted 23 new deaths, bringing the toll to 4,529.Florida reported 579,932 cases, up 1% from a day earlier, in line with the average increase in the previous seven days. The seven-day rolling total of new cases was 37,140, the fewest by that measure since the June 26 report.Hawaii experienced a 3.4% increase in cases, bringing the total to 5,215, according to the data from Johns Hopkins and Bloomberg News.

Atlas, a Stanford University neuroradiologist who’s now a fellow at the school’s conservative Hoover Institution, was named by Trump last week. He’s been a critic of lockdowns and has said that children risk little from exposure to the virus.

Amsterdam increased supervision of bars and restaurants to make sure they adhere to Covid-19 guidelines as the number of new cases is on the rise, said Mayor Femke Halsema. Bars and restaurants can face fines and a forced closing of up to four weeks. If new infections continue to rise, the Dutch capital will also consider an early closing time for bars and restaurants, a mandatory face mask across the city and a prohibition on gatherings of more than 30 people, she said.

The rate of positive tests over the past 14 days was unchanged at 6.5%. Hospitalizations rose for the first time in more than two weeks, climbing 1.7% to 5,061 patients. They’ve fallen almost 30% from a peak in July.

Houston’s virus reproduction rate was 0.84 on Monday, the eighth straight day below 1, a signal that the spread is slowing, according to the Texas Medical Center.

The positive-test rate in the fourth-largest U.S. city also continues to shrink. Seven-day average positivity ticked down to 8.6% from 10.5% on Aug. 11 and almost 17% a month ago, the TMC said on its website. Hospital admissions for Covid-19 patients totaled 116 on Monday, down 21% from last week.

Irish Prime Minister Micheal Martin outlined a slate of new measures to curb the spread of the virus. Speaking to reporters in Dublin, he said gatherings in homes, both indoors and outdoors, should be limited to six people. Where possible, people should work from home for another month, and public transport should be avoided, he said. All sports events should be played behind closed doors, he said, scrapping a previous limit of 200 spectators. Police will be given powers to enforce rules in bars after what Martin described as “appalling” scenes in some pubs.

New York, New Jersey and Connecticut expanded their travel quarantine list to visitors from 35 states and territories, with Alaska and Delaware newly added. The guidance to self-isolate for 14 days applies to people arriving from an area with a positive test rate exceeding 10 per 100,000 residents, or a 10% or higher positivity rate on a seven-day rolling average.

Australia has signed a letter of intent with AstraZeneca Plc to receive the University of Oxford’s coronavirus vaccine should it prove successful, with Prime Minister Scott Morrison vowing to distribute it free to all Australians.

A final agreement will detail distribution, timing and the price of the vaccine, with hopes the university’s project may be able to deliver the first product by as soon as the end of this year. It would be manufactured in Australia.

Arizona recorded a positivity rate of 16.4%, the highest since Aug. 2, when the state Department of Health Services reported 18.8% positive tests.

New Covid-19 cases continued to rise at a modest pace as the state on Tuesday reported 915 infections, a 0.5% rise that brought the total to 194,920. The gain matched the 0.5% average increase of the prior seven days. The state counted 23 new deaths, bringing the toll to 4,529.

New York Governor Andrew Cuomo is writing a book out about his experience leading the state through the coronavirus pandemic. “American Crisis” is set to be released on Oct. 13 and chronicles the state’s actions starting in March as New York quickly became the epicenter of the outbreak in the U.S.

Cuomo in the book discusses the daily press briefings that put him in the national spotlight and earned him the title of “America’s Governor,” and comments on the federal government’s response to the crisis, according to a news release.

With the virus currently under control in New York, and the transmission rate below 1%, Cuomo describes his administration’s response as the “model for effective action,” according to the release.

State health officials have said the elderly residents, who are highly susceptible to the disease, largely contracted it from nursing home staff.

Florida reported 579,932 Covid-19 cases on Tuesday, up 1% from a day earlier, in line with the average increase in the previous seven days. The seven-day rolling total of new cases was 37,140, the fewest by that measure since the June 26 report. The new daily rate of people testing positive for the first time fell to 7.9% for Monday, from 8.2% on Sunday. It was the third reading under 8% in four days.

Deaths among Florida residents reached 9,758, an increase of 219, or 2.3%, according to the health department report, which includes data through Monday. Although cases and hospitalizations have been slowing in Florida, the numbers shed light on the toll of Covid-19. Deaths often trail infections by weeks, and generally take even longer to be reflected in the data.

The mayor signed an executive order Tuesday requiring hotels and short-term rental companies to obtain quarantine forms with contact information when guests arrive from restricted states, before giving them a room. Violation of the order would constitute a misdemeanor criminal offense punishable by a fine, de Blasio said.

The mayor also advised New Yorkers to avoid travel to states with high virus infection rates, and to quarantine for 14 days if they do return from one of the states where the disease is raging. The city has achieved a 1.5% positive test rate, according to the latest data, and among 44 patients admitted to hospitals with respiratory symptoms, only 13% tested positive for Covid-19 virus, de Blasio said.

A state agency in Iowa says it is working to fix a data error on its coronavirus website that has artificially lowered the number of new confirmed cases and the state’s positive test rate, just as schools are relying on that data for reopening decisions, according to the Associated Press. The glitch means the Iowa Department of Public Health reported potentially thousands of recent Covid-19 infections as having happened much earlier.

Chancellor Angela Merkel ruled out any further loosening of virus measures in Germany, saying that a doubling in the number of daily cases in the last three weeks must be contained. Europe’s largest economy recorded the highest number of new infections in nearly four months on Tuesday, fueling fears about a resurgence across the continent.

Countries must avoid vaccine nationalism after earlier bouts over supplies exacerbated the pandemic, according to WHO Director General Tedros Adhanom Ghebreyesus. “As new diagnostics, medicines and vaccines come through the pipeline, it’s critical that countries don’t repeat the same mistakes,” he said at a briefing.

WHO officials urged member states to join its Covax facility, which aims to accelerate vaccine development and to guarantee fair and equitable access.

Finland’s prime minister, Sanna Marin, moved to working from home on Tuesday and is getting tested for Covid-19 after experiencing mild respiratory symptoms, she said on Twitter. The 34-year-old leader told local media that she’d caught the cold from her young daughter who had recently returned to daycare.

Austria is reevaluating its border regime as new infections continue to rise, driven by summer holiday returnees from regions including the former Yugoslavia. Chancellor Sebastian Kurz and the interior and health ministers may announce new testing capacities for border checks or new travel warnings at a briefing after their meeting on Tuesday.

The country last added Croatia to the list of risky countries, which means people returning from the popular summer destination must provide negative tests or quarantine when they return.

bloomberg.com” data-reactid=”94″>For more articles like this, please visit us at bloomberg.com

Back-to-School Help for Students Without Internet

Tue Aug 18 , 2020
Consumer Reports has no financial relationship with advertisers on this site. For Marcy Gage, getting decent broadband service for her home has been a 15-year battle. Because of her location in rural Maine, she’s had to rely on expensive-yet-spotty satellite internet because the local cable company stopped laying lines about […] 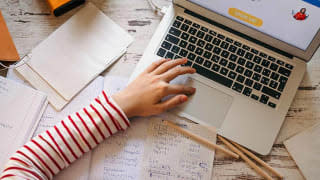