Reddit moderators censor WSWS article on Trump’s speech at Republican convention By Kevin Reed 29 August 2020 On Friday, the World Socialist Web Site article “Trump runs for Führer” was censored and removed by Reddit moderators after it received over 9,000 upvotes and was promoted to the site’s front […]

On Friday, the World Socialist Web Site article “Trump runs for Führer” was censored and removed by Reddit moderators after it received over 9,000 upvotes and was promoted to the site’s front page.

A link to the article, which characterized the president’s acceptance speech at the Republican National Convention as a fascistic tirade, was posted to the subreddit r/politics at 7:10 a.m. by Reddit user u/VoteProgress. 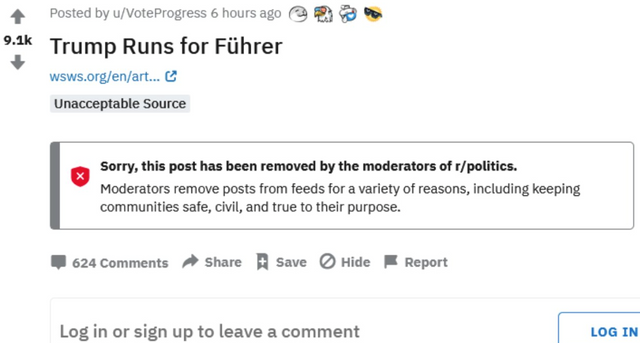 “Trump runs for Führer” was quickly read by thousands of Reddit users. By 1:30 PM, the WSWS article had received over 9,000 upvotes and more than 600 comments, the majority of which supported the WSWS’s assessment of Trump’s speech.

One of the top comments said, “It’s about time the media started calling it what it is. He’s a fascist, plain and simple.”

At approximately 2:30 PM, r/politics moderators intervened, labeling the WSWS article as coming from an “unacceptable source.” The subreddit discussion was quickly terminated and the link preview of the article removed and replaced with a box stating, “Sorry, this post has been removed by the moderators of r/politics: Moderators remove posts from feeds for a variety of reasons, including keeping communities safe, civil, and true to their purpose.”

Andre Damon, the article’s co-author, remarked on Twitter, “Only ‘civil’ comments about the Great Leader are allowed on Reddit.”

As a social media platform with 330 million users, Reddit is by far the most popular news aggregation and web content rating website on the internet. Registered users submit content to the site such as links, texts and images. Other users then vote this content up or down to determine what is most popular or what content will rise to the top of a particular subreddit. Those items that receive the largest number of upvotes end up on the site’s front page.

The Reddit site, which could be described as a “bulletin board” form of internet technology, is organized into user-created subreddit categories that contain content relevant to a specific topic, such as news, science, movies, fitness, etc.

Among the powers of subreddit moderators is management of the links “whitelist.” This is a list of internet domains from which users are allowed to freely post links to the subreddit. The World Socialist Web Site was removed from the r/politics whitelist in June without notification or explanation.

The labeling of the WSWS article “Trump runs for Führer” as coming from an “unacceptable source” and the termination of the discussion concerning it on r/politics is an act of outright political censorship. This is underscored by a review of some of the domains that remain on the subreddit’s whitelist.

There are presently 1,021 domains of publishers, organizations and government departments on the r/politics whitelist. Among the sites whitelisted are those of all factions of the Democratic and Republican parties, as well as extreme-right publications such as TheFederalist.com and Breitbart.com.

The Federalist, a far-right publication launched in 2013, has engaged in openly racist reporting by tagging content specifically as “black crime.” It has published numerous articles providing false and dangerous public health information about the coronavirus pandemic.

Among the Federalist articles on the pandemic is one titled “How Medical ‘Chicken Pox Parties’ Could Turn the Tide of the Wuhan Virus,” which encourages people to “risk deliberate infection for the sake of themselves and the greater good.”

Breitbart.com was founded in 2010 and christened by far-right ideologue Stephen Bannon as the “platform of the alt-right.”

The World Socialist Web Site is blocked and banned on r/politics, while such proponents of pseudo-science, racism and right-wing violence are considered acceptable and placed on the domain whitelist. This reveals the political bias of the subreddit moderators.

It should be pointed out that Reddit was acquired by the publishing conglomerate Condé Nast in 2006 and operates as an advertising-driven, profitable social media platform. It has a Wall Street valuation of approximately $2 billion. Its leadership has joined with tech giants such as Microsoft, Facebook and Twitter in a collaboration with US government intelligence agencies on “election security,” a euphemism for online political censorship.

The attempt to block from Reddit readers the political analysis of the World Socialist Web Site concerning the efforts of Donald Trump and the Republican Party to create the basis for an American form of fascism serves, in particular, the political interests of the Democratic Party. The Democrats and the presidential campaign of Biden and Harris are downplaying the moves by Trump toward a personalist presidential dictatorship and the threat to democratic rights posed by the mobilization of the US military and federal law enforcement agencies against protesters in cities across the country, as well as Trump’s incitement of fascist vigilantes against those demonstrating against police violence.

The reasons for this political cowardice and cover-up are explained in the conclusion of the article that has been removed by the r/politics moderators:

The American working class, devastated by the economic crisis, increasingly hostile to the back-to-work campaign that Trump is leading, and ever more explicitly hostile to capitalism, is emerging onto the political scene.

It is this social force, not the spineless Democratic Party and the factions of the affluent upper-middle class and Wall Street for which it speaks, that is the real opposition to Trump’s efforts to create an American fascism.

Why is the World Socialist Web Site banned from the subreddit r/coronavirus?

To fight this blacklisting:

Thu Sep 3 , 2020
The MarketWatch News Department was not involved in the creation of this content. Aug 27, 2020 (Heraldkeepers) — Major players of the Connected Medical Devices Market are facing hurdles keeping their production facilities operational due to the paucity of adequate personnel and resources amidst the COVID-19 (Coronavirus) outbreak. Get a […]