“Opening the doors to behind my deepest sense of self. A warm tsunami that washes everything away in its wake. A key that opens even the darkest and most hidden locks.”

Founded in 2005 as the “front page of the internet,” Reddit’s ability to honor anonymity and foster discussions on topics the mainstream often shies away from, has made it a go-to source for sexual exploration in the form of its kink subreddits, communities that are often stigmatized offline.

Sexual fetishism was previously considered a mental illness, and tainted the mainstream’s opinion of kinky people

Psychology’s “Holy Grail,” the Diagnostic and Statistical Manual of Mental and Physical Disorders, considered sexual fetishes a form of mental illness until 2013, and that legacy had serious consequences for people with kinks.

Reddit, and before that, the dialup chatroom communities of the 1980s and 90s, were born out of that stigmatization. These internet platforms provide non-judgmental spaces for people with particular kinks to share their experiences, ask for advice, and discuss how embracing them has benefited their sex lives.

Reddit has provided a stable haven for the kinky, as fringe platforms have fizzled out or been taken down

People in kink communities have long gravitated towards the internet when building their circles because of societal stigmas. Queer people were some of the first to create these communities and they became an integral part of queer culture, them reporter Chingy L wrote in 2019.

According to Sam Hughes, a sexual fetishism researcher and doctoral candidate at the University of California – Santa Cruz, online kink communities popped up long before Reddit’s 2005 inception.

Usenet, an online text-based forum where queer people virtually connected as early as 1983, the year the internet was invented, paved the way for Reddit’s success as an educational and community-building tool for the sexually stigmatized. On Usenet, gay people created the online bulletin net.motss (“Members of the Same Sex”) to discuss discrimination they were facing. Bulletin Board Services was another dial-up-powered network of chat rooms that allowed anonymity, providing a safe space for questions about kink and giving rise to online kink communities.

But they weren’t perfect solutions.

“So for a lot of these communities, it’s the story of almost a diaspora where they form a community somewhere and then the community gets destroyed technologically, and they have to find a new space,” Hughes told Insider.

Reddit, however, has been one of the few places — and the most prominent one — where kink-related conversations have been able to thrive and develop (relatively) unencumbered.

Though social media has seemingly opened a world of connection and community, that isn’t true when it comes to sexual content that isn’t deemed mainstream.

“If you’re a website that’s trying to build a mainstream audience, sometimes a way that you deal with that is you cut out people that are sexual minorities as a way to try and make the sites more normal and more appealing,” Hughes said.

FOSTA-SESTA, a federal law to curb sex trafficking that penalizes internet services for sexual content, reinforces these anti-sex guidelines. Since the bill was passed in April 2018, kink-specific websites like Pounced.org, as well as mainstream platforms like Craigslist and Google, have removed sex-related content, Vox previously reported.

Reddit stands alone as the only mainstream social media site that largely protects content on the grounds of free speech. It is a complicated position. The site has removed some of its sex-specific subreddits as a result, including r/escorts, r/maleescorts, r/hookers and r/SugarDaddy. It also has a poor track record on censoring communities that exploit child pornography, which is illegal.

But its commitment against censorship allows hundreds of other, positive but “taboo” communities to flourish.

What’s more, unlike on other platforms, you can be anonymous, making it an alluring platform for people interested in exploring sexual taboos. You don’t need an account to access subreddits, including NSFW and kink-related ones. People can simply go to the website and type in the community of their choosing. To post, you can create an account using any username.

“Reddit is great in that it has this really low barrier to entry. You don’t necessarily need to have a profile. You can be pretty anonymous on the site, and that’s great for folks who are really worried or just getting their feet wet or just there to find images or media,” Hughes said.

Kink subreddits are “sex-positive places where people are going to learn,” according to a sex researcher

“I had very explosive growth for my page and attracted tens of thousands of followers in a fairly short period of time,” Lehmiller told Insider.

But that changed. “Growth has really become stagnant because Facebook has changed their rules in terms of whether or not they promote sex pages and so forth. And so it’s just not really a platform where I could connect and reach people in the way that I used to in the past.”

On Reddit, it was a different story. In the same time period, he witnessed the growth of the r/psychologyofsex subreddit he created for his work, which he’s found to be more sexually-accepting.

“For most of the sex-related communities that I’ve seen on Reddit, these tend to be sex-positive places where people are going to learn, they’re going to connect, they’re going to feel normal,” Lehmiller said. “There aren’t, at least from what I can see, a lot of downsides to most of these subreddits, because they’re really just promoting more sexual communication and freedom of expression.”

A place to be less alone

According to Lehmiller, there’s a misconception that internet communities gave rise to sexual kinks and fetishism. In reality, sexual fetishes existed long before the internet, but people who identified with them hid in the shadows, or repressed their interests, because of the stigma surrounding them.

Usenet, then Bulletin Board Services, and now Reddit, have changed that.

“Most people who have interests in kink or fetishism feel weird or abnormal in some way, because information about these interests just isn’t readily available because they’ve been widely stigmatized and pathologized for a very long time within the mental health community, and the medical community, and just in public in general and in our broader culture and society,” Lehmiller said.

“So having this online tool, this resource where people can go and to learn more, to connect with others, to be less alone, is something that’s very valuable to them.”

Tue Jun 30 , 2020
The Facebook “like” sign is seen at Facebook’s corporate headquarters campus in Menlo Park, California, on October 23, 2019: JOSH EDELSON/AFP via Getty Images Facebook has launched a new campaign to help people spot false stories and misinformation. The ads will encourage people to question what they read online, in […] 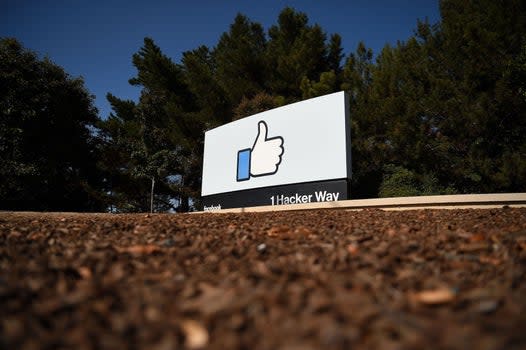