QAnon hits the mainstream and Trump is on board Uploads%252fvideo uploaders%252fdistribution thumb%252fimage%252f95227%252ff62093f7 4257 48da 913f 96f8c0b0699a.png%252f930x520.png?signature=huwxjugchsa51bdmlgjkdihay4k=&source=https%3a%2f%2fblueprint api production.s3.amazonaws & If, by some strange good fortune, you remain unfamiliar with QAnon, that’s about to change. The conspiracy theory has finally gone 100 percent mainstream and is about to be fully unavoidable. […]

If, by some strange good fortune, you remain unfamiliar with QAnon, that’s about to change. The conspiracy theory has finally gone 100 percent mainstream and is about to be fully unavoidable.

It’s nearly certain there will soon be a QAnon supporter in congress, Fox News is running ads that wink at the conspiracy, and, hell, President Donald Trump is sorta backing it now too.

First thing first: Marjorie Taylor Greene, a right-wing candidate who buys into the QAnon conspiracy theory, won a House primary runoff election in Georgia on Tuesday. The district is deeply red, meaning she will almost definitely be elected.

If you need a very quick primer on QAnon, here you go: It’s a deeply strange, pro-Trump conspiracy that believes the president is eventually going to expose and punish a massive pedophile ring among a cabal of U.S. elites. It centers on an anonymous online figure who goes by “Q,” and it has so many strange and nearly untraceable tentacles that it’s almost impossible to wrap your head around it completely.

QAnon backers, for instance, have promoted the idea that furniture retailer Wayfair is trafficking kids in overpriced cabinets. The entire conspiracy is completely unfounded and divorced from reality, but its supporters are fervent and very aggressive online.

Greene is apparently all about it.

“Q is a patriot,” Greene said, for instance, in . “We know that for sure.” She adds later in the video: “There’s a once-in-a-lifetime opportunity to take this global cabal of Satan-worshiping pedophiles out, and I think we have the president to do it.”

Greene also has a history of making racist comments. She has said that Black people “are held slaves to the Democratic Party,” according to videos uncovered by Politico.

“It’s a slavery system to keep their vote,” she said.

Greene claims as well that there was an Islamic invasion of the U.S. government, and she has espoused her belief in the well-worn myth that philanthropist George Soros is a Nazi despite the fact that he’s Jewish and survived the Holocaust.

Here’s a thing I don’t get. Say you’re a QAnon believer who gets elected to Congress. Do you just…show up to the office every day with people you think are Satan-worshipping pedophiles?

As you can imagine, some in the GOP have been eager to distance themselves from Greene, considering her extreme and hateful comments and her ongoing support for a conspiracy theory popular on the fringes of the right-wing corners of the internet.

“The comments made by Ms. Greene are disgusting, and don’t reflect the values of equality and decency that make our country great,” said Representative Steve Scalise, the No. 2 Republican in the House, for instance.

But, lo and behold, everything changed when Greene won the primary this week. As goes Trump, so goes the Republican party, and the president threw his weight behind Green after she won.

“Congratulations to future Republican Star Marjorie Taylor Greene on a big Congressional primary win in Georgia against a very tough and smart opponent,” the president tweeted Wednesday morning. “Marjorie is strong on everything and never gives up – a real WINNER!”

Congratulations to future Republican Star Marjorie Taylor Greene on a big Congressional primary win in Georgia against a very tough and smart opponent. Marjorie is strong on everything and never gives up – a real WINNER!

Back when things happened in-person, Q gear was everywhere at Trump rallies. So it makes sense QAnon supports were elated at Greene’s win and Trump’s public support, as Rolling Stone wrote. It’s a major sign that QAnon — a dangerous and fast-growing movement — is now firmly in the mainstream.

Alex Kaplan, a researcher with the liberal group Media Matters for America, posted on Twitter that 32 — thirty-two! — congressional or state legislative candidates have both expressed support for QAnon and secured a spot on the ballot in November.

As of tonight, at least 32 congressional or state legislative candidates who have expressed some level of support for QAnon — a conspiracy theory the FBI has labeled as a potential domestic terror threat — have secured a spot on the ballot in November. pic.twitter.com/Uv05Eai3Wl

The conspiracy is now a full-on force in Republican politics. Daily Beast reporter Will Sommer has routinely reported on the legitimization of QAnon and described how that’s an incredibly dangerous proposition.

“[Greene’s election] gets us closer to the day the belief that your opponents are cannibal-pedophiles deserving mass executions is an acceptable opinion,” Sommer wrote on Twitter.

People have said a QAnon believer winning a House seat won’t matter because she’ll be a back-bencher. But QAnon thrives on this legitimization. It gets us closer to the day the belief that your opponents are cannibal-pedophiles deserving mass executions is an acceptable opinion.

If all of this wasn’t strange enough, QAnon has even seeped its way into the absolute dumbest possible place: an advertisement for the Trumpy Bear. Fox News has run the ads for the Trump-themed teddy bear. It begins with a random claim that “a storm is coming,” which (without getting too deep in the weeds) is an obvious reference to a popular QAnon phrase.

These ads have actually been around for a while but recently went viral again, seemingly because folks realized QAnon is being used to sell the deeply strange product.

That’s politics and, well, life in 2020 — more and more, QAnon is seeping into mainstream culture. NBC News tracked how “Q” rose from one of many “anon” accounts to prominence. Basically, a couple of 4Chan accounts and a YouTuber pushed the theory until it caught fire.

It’s tenets are so ridiculous that it’s tempting to dismiss it as hilarious. But make no mistake: It’s dangerous. It’s led to real-world violence. Anthony Comello, alleged killer of a mob boss, cited QAnon theories as the reasoning for the murder. Reddit has already banned the largest Q-related subreddit for inciting violence. West Point’s Combating Terrorism Center dubbed it national security risk.

And now, soon enough, the theory will almost certainly spread into the halls of Congress.

We’re eating a lot more pizza during the pandemic. Why Domino’s is getting the biggest slice of the pie

Wed Aug 12 , 2020
Our mission to help you navigate the new normal is fueled by subscribers. To enjoy unlimited access to our journalism, subscribe today. Once a week Brandi Johnson finds herself peeping through her red curtains, on the lookout for her favorite delivery—the one that means she doesn’t have to cook dinner. When […] 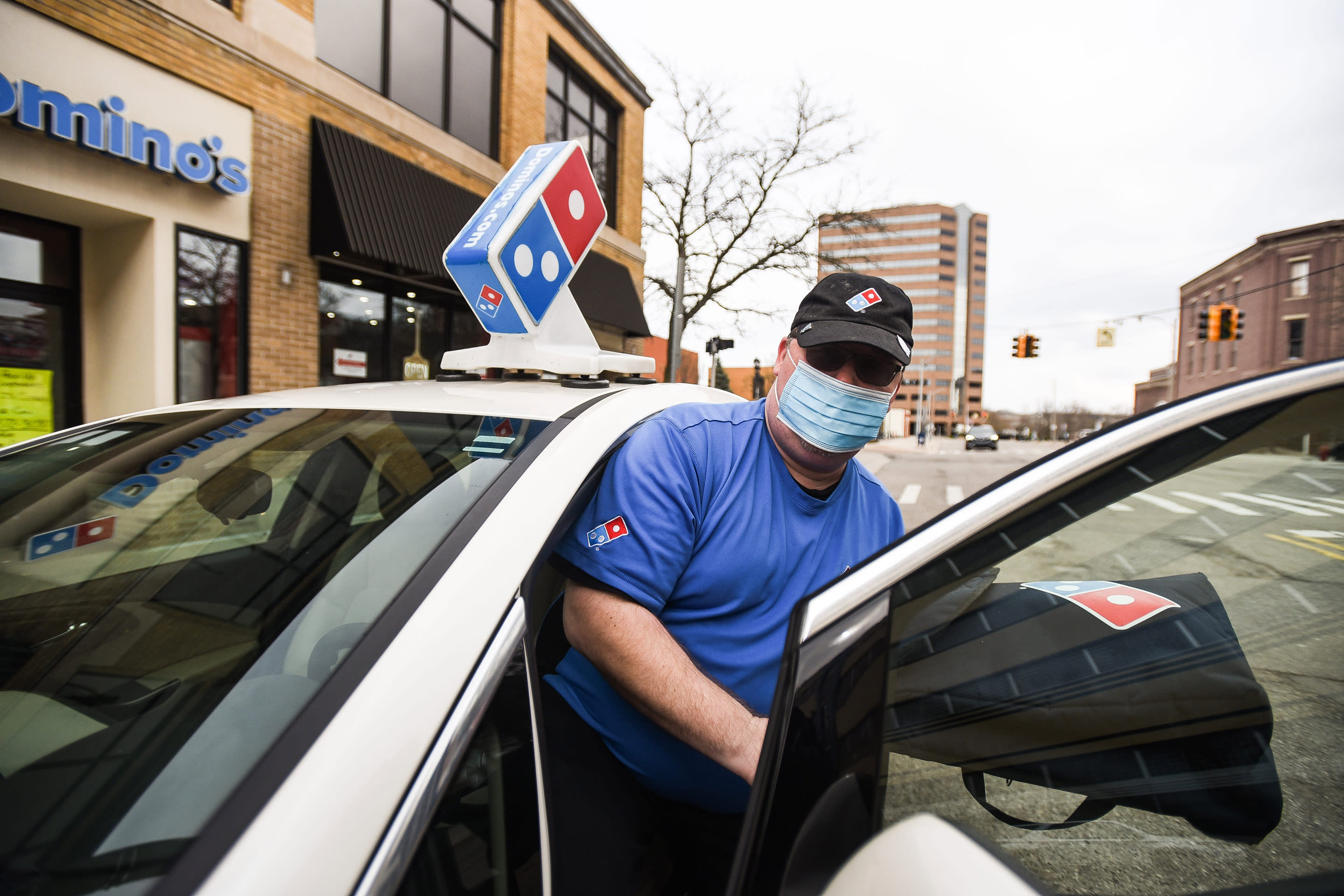