SHANGHAI — The foot traffic at Parkson was middling at best. Although the well-known department store on Huaihai Road no longer had that eerie ghost town feeling that had settled upon the entire city in February when COVID-19 was at its peak in China, it could not exactly be described […]

SHANGHAI — The foot traffic at Parkson was middling at best. Although the well-known department store on Huaihai Road no longer had that eerie ghost town feeling that had settled upon the entire city in February when COVID-19 was at its peak in China, it could not exactly be described as lively either.

So when I paused in front of the Shiseido counter, I had the full attention of beauty adviser Mei, who had on an orange peachy lip shade and upwardly brushed brows. With the high summer heat, she suggested I look into some brightening products for my freckles and consider the Synchro Skin foundation to beat the humidity and what seemed like the constant downpour during Shanghai’s plum rain season.

Nothing out of the usual for a beauty shopping trip, but after I agreed on the right shade of Synchro Skin and purchased it with a scan of my Alipay QR code, she also asked to add me into a WeChat group. The group had 170 other people who had also purchased a product from the Japanese brand, and over the next few days, instead of what usually would have been a one-off interaction, Mei’s cheerful and cute messages continued to appear on my phone, interspersed among my other group chats with friends sharing memes or making plans to meet up for dinner.

In Mei’s group, first, there was a special birthday promotion for people born in July, then I saw a post featuring an up-and-coming Chinese model wearing a Shiseido lipstick at an event. Later, I saw that the concession was trying to clear a bunch of products that were going to expire in a year, as opposed to three years. Incense, my favorite shade of Shiseido gel lipstick which usually retails for 240 renminbi, was on sale for unbelievable 36 renminbi. I bought it and three others from the clearance. Mei also cross-promoted her account on TikTok, where she posted beauty look inspiration.

Even as general retail hemorrhaged under COVID-19, beauty has been remarkably resilient, buoyed by digital tools and ways of online selling. Beauty, for a confluence of factors, seems to be the perfect category to thrive in the current environment.

A July report from Ruder Finn and Consumer Search Group found that average beauty spending in the next 12 months in China is estimated to slightly increase to 11,355 renminbi per person–of which 44.3 percent of which on makeup products, 38 percent on skin care and 17.7 percent on fragrances. Lip products are projected to grow 21 percent in sales volume in the next year.

Traditionally, cosmetics has been one of the last hold outs to full online commerce, namely due to the nature of the product. Compared to accessories and apparel, slight shifts in undertone of a makeup product could mean the difference between a shopper loving and hating an item, and in skincare, texture and consistency are also paramount. So online beauty sales tended to be repeat purchases or the result of first the consumer browsing in an off-line store, but not so any longer in China.

For example, in March at the height of COVID-19, Pinduoduo saw sales of beauty products increase 163 percent compared with the same period last year, of which eye shadow gained 244 percent and lipsticks gained 274 percent. On TikTok, beauty video content has increased by 228 percent year-over-year in 2019, faster than the average TikTok growth of 192 percent.

Just how are brands achieving this pivot to online?

Jenny Chen, cofounder of the agency Walk the Chat, said the overall direction brands has not shifted so much, rather that the pace of change has accelerated. “COVID-19 just reinforced their strategy of focusing digitally,” Chen said.

“What changed is distribution: department store associates are moving online and becoming online livestreaming sellers. This is a big shift, but is something they have to adapt to because they are getting no traffic off-line. At least in China, the beauty brands who are fast-growing have always placed digital marketing as a top priority — brands like Home Facial Pro and Perfect Diary, some of which rank ahead of the largest international brands like L’Oréal Paris.”

“They have to be the next Austin [Li],” said Wen Zhang, founder of digital agency The Breakfast Press, referring to arguably China’s biggest livestreamer whose name is synonymous with lipstick. “That’s not the beauty adviser in the past. They have to learn how to do livestreams, too, and stand at the counter. What it does is it turns them into KOCs [key opinion consumers].”

Li, in fact, started out his career as a beauty counter consultant for L’Oréal in Nanchang, a second-tier city in China before making it big online.

Chen added that this requires a different kind of sales training. “When you do livestreaming you have to engage the users to like you, to click on the star button or the heart button so that the algorithm picks up that something is trending. They have to learn new techniques of selling. It’s very hard to predict who is going to be popular, it’s all algorithm based. The point is to make many staff try and maybe one of them could get a large following.”

Meanwhile, business accounts on WeChat Work, like the one Mei used to add me to her group, originally developed as an office communication tool similar to Slack, and have evolved to greatly expanded capabilities to manage CRM.

Xiaolei Gu, the director of innovation at FaberNovel, said that using these digital tools the consumer can be analyzed and targeted in a much more nuanced and efficient way than before.

“They note down my name, location, maybe that I’m tall, have long hair, with sensitive skin. It’s all very targeted,” Gu said. “Even if my friend and I walk into the same store at the same time, if we are served by two beauty advisers, we might be in two different groups. There’s a whole infrastructure at the backend to monitor the group activity.

In particular, livestream uniquely fills what had been the last remaining gap to purchase beauty. For instance, if a livestream is promoting an eye shadow shade, it will broadcast under a variety of light settings to help shoppers decide. Audiences can interact with the KOL hosting the broadcast to ask them how the product will fare when exposed to sweat or humidity or to any unique concerns.

Price point also plays a huge factor in its popularity, as even luxury beauty stays within a relatively affordable range — domestic brands products often cost less than 100 rmb, making it an easy impulsive buy. Combined with generous return policies and free shipping, complimentary or very cheap samples to purchase, and a favorite influencers’s recommendation, the consumer is game.

“How can something that is so off-line truly just move online?” Zhang said. “My perspective is one of the biggest reasons China can is not just because they have digital platforms but culturally, they can accept it, too.”

Jerry Liu, the head of China Internet at UBS, attributes this digital aptitude to the unique evolution of the consumer in China, which is vastly differed to the western consumer journey.

“The off-line infrastructure was not as developed to begin with so consumers and merchants have needed the online platforms more,” Liu said. “Secondarily, the domestic brands were not as well developed, so it was a learning process [to use the Internet in order to reach brands] and they grew up with Taobao. China did not have these giant malls like in the U.S. in the prior decades [first]. China leapfrogged and went from not having great off-line to having great online.”

Beauty also, as it turns out, has a natural entertainment potential to it. Yvonne Ching, founder of the makeup brand Heir and an influencer who recently hosted livestreams for Burberry and Louis Vuitton, said working with cosmetics is a much easier project compared to apparel. “With a single makeup palette, you can quite easily create an hour’s worth of content and do tutorials,” she said. “If you are wearing a dress or talking about a bag, however, it’s much harder to interact with the product for that amount of time.”

Among the major livestreaming platforms, Taobao Live is the market leader, followed by Kuaishou and TikTok. Meanwhile, WeChat is improving features for retailers and brands, and Little Red Book, or Xiaohongshu, just announced at the start of this month that it would reduce its platform commission from around 20 percent to as low as 5 percent, in order to be more competitive for merchants. In the past, users tended to rely on Xiaohongshu pre-purchase but would often leave the ecosystem and then transact on Tmall or WeChat mini programs.

Walk the Chat’s Chen enumerated the different platforms. “Bilibili is very different it’s more of a video platform where you can watch a 20-minute video to learn about a certain style of makeup,” she said. “There’s a community where you can discuss how to use each in the comments section. For TikTok, beauty it’s easier for the average user to get into it because it’s very short and it makes cosmetics look easy versus if you are, say, a professional beauty artist. They are on Bilibili, which allows them to get into more in depth and have discussions.”

Zhang agreed, noting that different platforms appeal to distinct demographics and geographical regions. “With COVID-19, beauty KOLs have moved seriously to TikTok because it’s just really relatable. People want to relate to the KOL and feel like this is somebody that could be that be my friend,” Zhang said. “It’s different to WeChat and Xiaohongshu, which are not that city defined. You have all walks of people, the dialects, the way they talk, what they eat, it’s more personal but it also means for luxury brands on TikTok, it’s going to be difficult. It’s a big gap actually.”

“Bilibili is a little bit like YouTube — you have a lot of vloggers, a lot of young people and students so brands like Brandy Melville or H&M who want to reach to students at university,” Zhang continued. “It’s the young crowd, people who like anime, people who cosplay.”

While Chinese consumers have been free to venture out to shops for months now with COVID-19 under control, these new online behaviors are sticky and the demand for livestreaming seems here to stay, Liu of UBS believes.

“It could be a good way to introduce new products [for luxury brands] because the livestream and KOLs can educate consumers,” he said. “Will brands want to move product that way more and more for everything they have? Probably not. But for some products and new launches, it might work.”

How useful really is an online personal trainer?

Fri Jul 31 , 2020
Photo credit: Kilito Chan – Getty Images From Cosmopolitan When the gyms closed in March, I won’t lie – I was gutted. I’d finally got back into the swing of things on the exercise front (after a very jolly Christmas break and a trip to Lisbon, where I ate enough […] 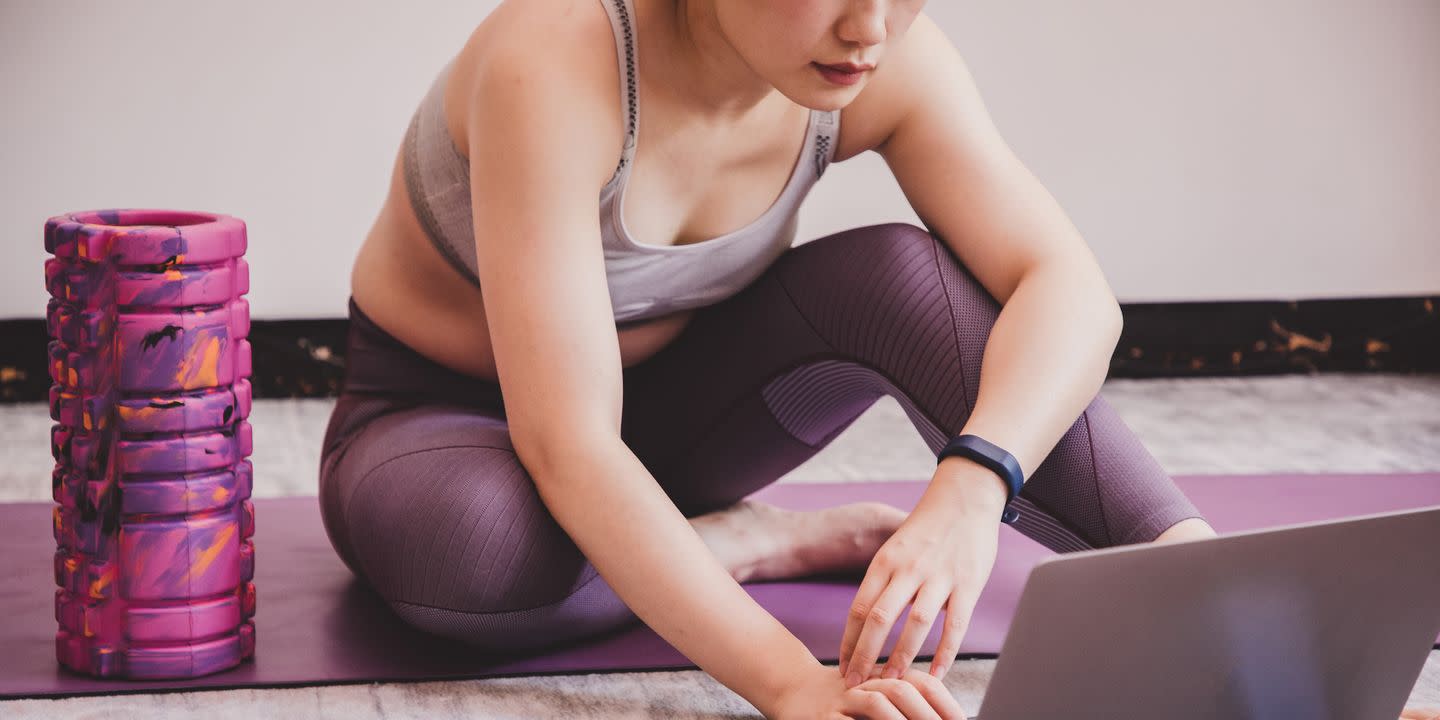