BRUSSELS (Reuters) – Alphabet <GOOGL.O> unit Google’s bid to take on Apple <AAPL.O> and Samsung <005930.KS> in the wearable technology market by buying Fitbit <FIT.N> hit a hurdle on Tuesday as EU antitrust regulators launched an investigation into the $2.1 billion deal.

The move by the European Commission on Tuesday came despite Google’s pledge last month not to use the fitness tracker’s data for advertising purposes in a bid to address competition concerns.

The EU antitrust enforcer said the data pledge was insufficient to allay its worries.

“The proposed transaction would further entrench Google’s market position in the online advertising markets by increasing the already vast amount of data that Google could use for personalisation of the ads it serves and displays,” the Commission said.

It singled out online search and display advertising services and ad tech services, where analytics and digital tools are used in digital advertising, as two areas that would be affected by the deal.

It said data collected via wrist-worn wearable devices appeared to be an important advantage in online advertising, and the deal would give Google an edge in personalising search engine ads and making it difficult for rivals to compete.

Ultimately this would result in higher prices for advertisers and publishers.

The investigation will also focus on digital healthcare and whether Google would make it difficult for rival wearables to function with its Android smartphone operating system.

The Commission will decide by Dec. 9 whether to clear or block the deal.

Google said the combination of its and Fitbit’s hardware would increase competition in the sector where players include Apple, Samsung, Xiaomi <1810.HK>, Huawei [HWT.UL] and others.

“This deal is about devices, not data. We’ve been clear from the beginning that we will not use Fitbit health and wellness data for Google ads,” Rick Osterloh, senior vice president for devices and services, said in a statement.

“As we do with all our products, we will give Fitbit users the choice to review, move or delete their data.”

The deal has drawn criticism from healthcare providers, wearables rivals and privacy advocates.

Fitbit has a 3% share of the global wearables market as of the first quarter of 2020, far behind Apple’s 29.3% share, and also trailing Xiaomi, Samsung and Huawei, data from market research firm International Data Corp showed.

Tue Aug 4 , 2020
President Trump returns to the White House on Saturday after a trip to his golf resort in Virginia. (Patrick Semansky / Associated Press) President Trump’s support among Republicans and other conservative voters has begun to erode amid the continued coronavirus pandemic and its associated economic havoc, a new poll from […] 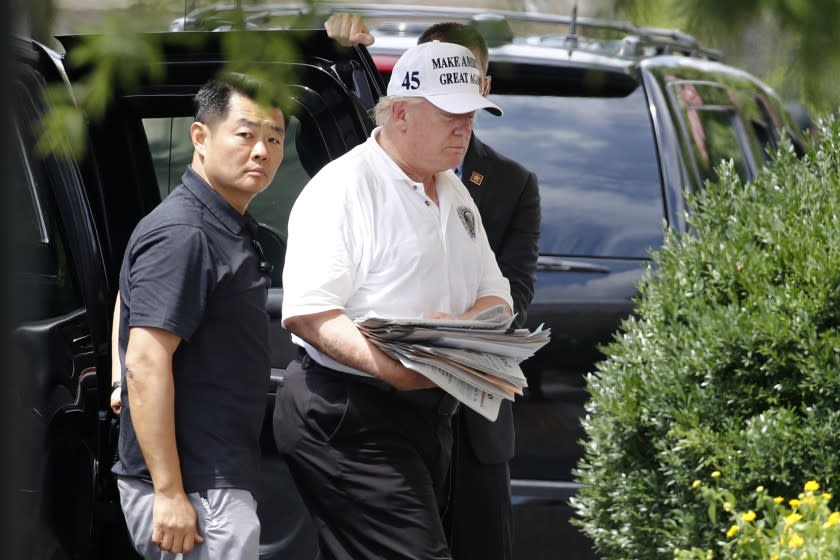