Demonstrators in a #MeToo survivors’ March in response to high-profile sexual-harassment scandals, on November 12, 2017, in Los Angeles. David McNew/Getty Images Waves of social activism and callout culture have defined quarantine, starting with the resurgence of the Black Lives Matter movement, followed by viral workplace-inequality stories, and now hundreds […]

Multiple industries and internet-adjacent communities appear to be in the middle of a massive #MeToo moment as hundreds of sexual-assault allegations have been amplified on social media in the past week.

In the gaming industry, The New York Times reported that more than 70 people, most of them women, have come forward with allegations that include gender-based discrimination, sexual harassment, and sexual assault.

Allegations against A-list celebrities — such as the actor Ansel Elgort, the singer Justin Bieber, and the “Riverdale” cast member Cole Sprouse, who have all denied the accusations — have trended on Twitter.

Online celebrities such as Twitter personality Jovan Hill and TikTokers Ondreaz Lopez and Cody Orlove have all responded to accusations of sexual assault and abuse, apologizing to the accusers but also denying the extent of their claims.

Additionally, stars in the professional-wrestling community have been accused of varying degrees of sexual assault, with the majority of the accusations emerging on social media using the hashtag #SpeakingOut, Deadspin reported. Some of the accused faced immediate consequences, including firings, as dozens of women in the wrestling community came forward in a matter of days.

Some communities appear to be taking the allegations seriously, particularly in the streaming and wrestling industries where authority figures can vet claims and hold people accountable.

But there are other allegations being brought forward by anonymous figures that can’t be vetted. Some of these allegations make their way to social media, where they can take hold and influence public opinion.

The internet moves at lightning speed and a pattern has begun to emerge: Allegations are posted online, they gain traction, the accused posts their denial, and the tide quickly flips on the accuser. The online community seems torn between a desire to “believe women,” brought on by the 2017 #MeToo movement, and a desire to believe the well-liked online figures who are being accused.

This desire to believe the denials from internet celebrities, musicians, actors, and other public figures has led to some people alleging there’s a “false-accusation trend” online. The idea of false accusations is a persistent one, largely rooted in unfounded stigma against accusers that has trickled down through generations. Now it appears to have reached Gen Z and online communities.

Social media has been a defining factor in the new #MeToo wave, starting with a viral thread about the comedian Chris D’Elia

While the 2017 #MeToo movement was largely sparked by reports about Harvey Weinstein from The New York Times and The New Yorker — which carried over into physical activism, such as protests — the current resurgence has so far occurred only in online spaces. If it continues to pick up steam, and if the accusations against famous figures like Elgort and Bieber are either supplemented by reporting or elevated to legal action, it seems likely that the recent burst of accusations could be amplified into something more akin to the global 2017 movement. Right now, the most serious claims and consequences appear to have been insulated in their respective communities — gaming and wrestling.

The surge in accusations can seemingly be attributed to the rise in social-justice activism that’s taken place following the killing of George Floyd, which inspired a burst of public protests worldwide. As more people turned to the internet during COVID-19 quarantine, anger over police brutality festered before eventually exploding into action. After Minneapolis burned, and protesters were beaten across the US, some police departments and cities have started to change their policies.

Recently, internet-driven activism has sprung up elsewhere as people channel their collective outrage toward change. Pay disparities along racial lines and a lack of Black, Indigenous, and people of color representation in workplaces have become trending issues in multiple industries, including media and makeup. In line with the anti-racism movement, cancel culture and viral callouts have both thrived, from capturing “Karens” on camera to “performative activism” backlash.

The first sexual-misconduct allegations to seemingly break the proverbial floodgates in the past week were against the comedian Chris D’Elia. One of his first accusers gained notoriety by comparing him to his character in the Netflix series “You,” a fictional comedian who grooms and rapes women. The accuser alleged that D’Elia preyed on her when she was 16 and he was 24, The Washington Post reported.

Her thread was amplified by the popular Twitter account @SheRatesDogs, which created a thread with nearly two dozen accounts of women alleging that D’Elia had harassed them as teenagers and young adult women, soliciting both nude photos and physical intimacy during encounters. In a statement to TMZ, D’Elia apologized for some of his past behavior, but denied knowingly pursuing “any underage women at any point.”

For the gaming industry and streaming community, the wave of allegations appears to have begun on June 19, when five women accused Twitch streamer SayNoToRage of sexual harassment. SayNoToRage, who goes by the moniker Lono and does not share his legal name publicly, has since apologized for his action, but his admission of guilt is the exception, not the norm, in responses to the current #MeToo wave. While many of the allegations against famous men like Elgort and Bieber have gone viral, most of the accused who have acknowledged the allegations, including those two A-listers, have denied them.

So far, most of the allegations have been met with denials, and without any objective vetting of the claims, the idea that there’s a ‘false-accusations trend’ has emerged

Without an admission of guilt, the denials have been met largely with acceptance — although a few counterarguments have been posed, as in Bieber’s case. Two women have most recently made accusations about Bieber, MTV reports, including one woman, Kadi, whose claims Bieber has not responded to, and an anonymous Twitter account created the day the accusations were posted under the name “Danielle.”

Both accounts have been subjected to investigations by random Twitter users, and the sentiment that Bieber was guilty — perpetuated, in part, by “antis,” or people who dislike Bieber for fan-related purposes — until Bieber posted his counterclaims, which seemed to largely sway opinion in the other direction. That said, there are still viral tweets and large discussions over whether Bieber and his team are lying, including in the replies to his own tweets.

Bieber issued 15 tweets countering the viral allegations against him, including articles, screenshots of purported emails about his Airbnb reservation, and a photo of a purported receipt for a hotel reservation. The thread of his own evidence, along with his statement that the allegations against him “were factually impossible” and that he would “be working with twitter and authorities to take legal action,” seemed to convince many of the social media users who were interested.

Since tweeting, Bieber’s laywers have filed a $20 million defamation lawsuit against two Jane Does — who are the two Twitter users who made sexual assault claims against him, People reported.

Most of the allegations and the denials have occurred so quickly that there hasn’t been very much reporting, and little to no legal action, to vet the claims. Rather, the court of online public opinion has been the ecosystem where the current #MeToo wave is occurring. And because the personalities being accused have huge platforms and a legion of fans, there’s an impetus to believe them over the accusers, many of whom are anonymous and have claims that would require more thorough vetting to stand up in court or in an article.

Given the anonymous nature of many of the allegations, a narrative seems to be developing online that there is a “trend” of false accusations against celebrities, even though some of the accusers — like Lopez’s — have doubled down to say they aren’t lying, and the accused is.

As Sprouse and Lili Reinhart said in response to claims about various “Riverdale” cast members that trended on Twitter, several of the allegations against various “Riverdale” stars were shown to seemingly have originated from the same IP address, suggesting that one person was making multiple anonymous unsubstantiated claims against multiple teen celebrities. That same Twitter user implied in a later tweet that they made false accusations to prove that a social-media mob would believe anything and Sprouse was innocent.

But there’s also a danger in assuming that because a handful of accusations aren’t true, the rest aren’t, an assumption that’s silenced or delegitimized accusers throughout history.

The idea that allegations are made to gain online fame is an especially dangerous mentality, because it contributes to a stigma that dissuades victims to come forward. The idea that accusers become famous themselves for making false accusations against famous figures ignored the backlash and hate from the accused person’s fans and from online communities dedicated to attacking women, such as those that organized campaigns during Gamergate.

Official figures suggest that the number of rapes and sexual assaults that are never reported or prosecuted far outweigh the number of men who are wrongfully charged for sex crimes they didn’t commit, and while fake rape accusations get a lot of attention, studies suggest that between only 2% and 10% of accusations are actually unfounded. But most of these statistics are based on accusations submitted to law enforcement, not social media, so the landscape may be skewed differently online. Without more research into the online environment that many accusers have turned to in 2020 to disseminate allegations, it’s unclear how likely social-media allegations are to be false.

While social media offers a place where accusers, who are predominantly women, can quickly disseminate claims to a wide audience, it also serves as an often toxic environment where people can side with one party only to quickly change their mind. Until more claims are vetted by reporters, investigators, law enforcement, and other neutral parties, it’s unclear how far the #MeToo resurgence will go.

Mon Jun 29 , 2020
Dawn Guilfoyle is one of thousands who have been barred from using their cash cards because of the failure of huge German payments firm Wirecard. “It’s really bad. I’m left with nothing,” she says. “Once the gas goes off, I’ll have none for cooking or hot water.” Ms Guilfoyle’s card, […] 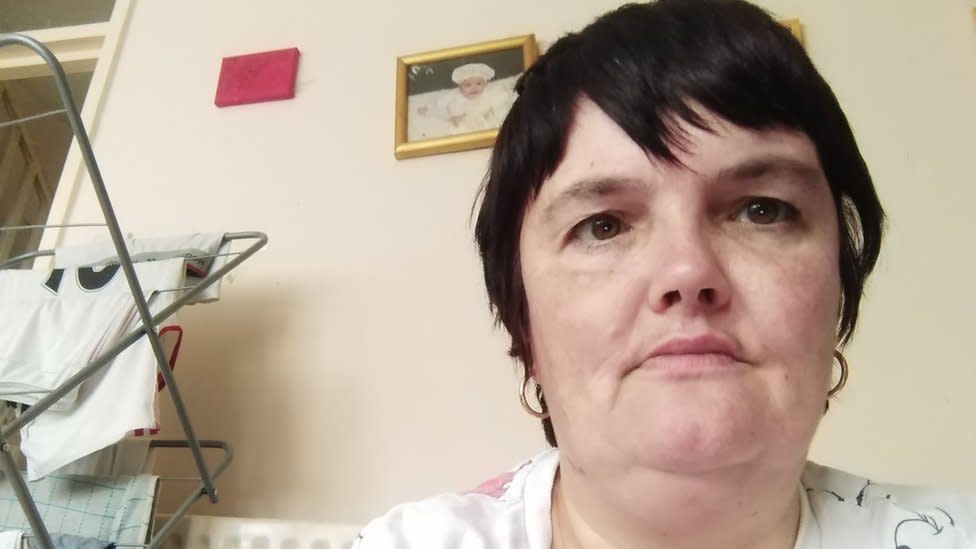