Win McNamee/Getty Former California Rep. Katie Hill following her final speech on the floor of the House of Representatives in October On Oct. 29, two days after she announced her resignation from Congress, Katie Hill sat in the bathtub of her Washington, D.C., apartment feeling ashamed, “just like this overwhelming […]

Win McNamee/Getty Former California Rep. Katie Hill following her final speech on the floor of the House of Representatives in October

On Oct. 29, two days after she announced her resignation from Congress, Katie Hill sat in the bathtub of her Washington, D.C., apartment feeling ashamed, “just like this overwhelming sense of despair,” she tells PEOPLE, “like there was no path forward.”

Her life had just unraveled in the shadow of two very different sex scandals.

Eleven days earlier, images of the 32-year-old freshman Democrat from California showing her naked with a female campaign staffer — and taken without her consent, she says — had been leaked to the right-wing website RedState, which wrote that Hill and her husband, Kenny Heslep, had been in an consensual three-way relationship with the campaign aide.

The website also reported that Hill allegedly had an affair with one of her staffers in her congressional office — an allegation that prompted the start of an official investigation in the House of Representatives. Hill resigned shortly thereafter.

She has denied having an affair with the male staffer in her House office, which would violate rules changed in the wake of #MeToo, but she admitted to the relationship with the female aide during her campaign and drew criticism from some advocates for the power imbalance.

Less than a year after she won office in 2018, Hill was out of Congress — she and her family beset by attacks online as she grappled with the public revelation of a relationship that had been secret and the separate affair claim, which she insists was false.

RELATED: Congresswoman Opens Up About ‘Terrifying’ Fallout of Nude Photo Leak & Affair Allegation — but Why She’s Not Hiding

In the tub in her apartment last October, Hill held a paring knife to her wrists, the second time in a little over a year she came close to attempting to kill herself, she writes in her new memoir, She Will Rise, published Tuesday. She says her turmoil was triggered in large part by her now-estranged husband, whom she alleges was abusive and whom she accuses of having been behind the leak of the photos of her with the aide.

She had “always known my ex had many ways he could make good on his promise to ruin me if he wanted to,” Hill writes in her book. (Heslep denied leaking the photo, and said his computer was hacked; through an attorney, he also says accusations of abuse are false.)

Last fall, Hill thought about dying. But she lived.

“Thankfully,” she tells PEOPLE now,  “I was able to pull myself out of it. But it is not something that I would wish on anyone.”

Her divorce from Heslep isn’t over yet since he “won’t sign it,” Hill says (his attorney says the agreement is being finalized); and Hill claims Heslep has harassed her — “trolling me online, and I changed my number and things like that. We’ve had to do several cease and desist to get them to stop.” His attorney denied that Heslep engaged in any wrongdoing.

Hill says that, with the help of victims’ rights attorneys, she is planning on filing a civil suit in the next few months against The Daily Mail, a British tabloid that published some of the leaked photos, as well as others including Heslep for allegedly distributing the images.

Heslep’s attorney, Erin McKinley, said in a statement to PEOPLE: “Ms. Hill has made no allegations of wrongdoing in her Petition for Dissolution. Mr. Heslep denies any allegations of wrongdoing or abuse outright. The parties are currently in the process of finalizing an amicable settlement in their divorce case. Mr. Heslep respectfully asks for privacy during this time.”

An emailed request for comment to a Daily Mail spokesman was not returned. Representatives with RedState did not immediately respond on Thursday.

Weeks after her resignation, Hill faced other tragedy.

Her mother, a nurse, required brain surgery in January and Hill returned to California and her mom’s house, where she was joined by her brother, Danny Bennett, who was training for the Navy SEALS.

“He’d struggled with substance abuse in high school,” Hill says, “but he’d gotten treatment and was able to get into the military, and we felt really good about his recovery.”

Soon after her mom’s brain surgery, however, Danny had a relapse. “It was cocaine, but it turned out that the cocaine was laced with fentanyl,” says Hill, who found her brother unresponsive and unsuccessfully performed CPR. He was 20.

“It was horrible. It was the most traumatic thing,” she says. “I was barely coming out from under a rock when all of that happened. You know, in some ways it put things into perspective that made it easier to heal from the other part of my life that has been challenging.”

To help with the healing, Hill’s psychiatrist changed the dosage of her anti-depressants, and she speaks to a therapist almost weekly.

She has a plan in case her moods plummet again and she thinks of suicide. “I’ve experienced depression a lot over the years,” she says. “I’ve been diagnosed with depression since I was a teenager.”

Following her brother’s death, Hill poured herself into writing her book, finishing in three weeks.

The memoir delves into the sexual abuse she says she experienced as a child and teenager, and it details resources for survivors on how to get help. Elsewhere, she discusses sexism in politics and offers her take on how progressive women can make political change.

Beyond the book, Hill is focused on her own political action committee, HER Time, aimed at electing progressive female candidates. Her latest project is her new podcast — aptly called Naked Politics with Katie Hill. (Indeed, moving on from her scandals has included a dose of self-deprecation. Earlier this year, she joked about an episode of House Hunters about a “throuple,” tweeting: “I’m gonna take at least partial credit.”)

“The purpose of the podcast is really to get behind the scenes,” Hill says of Naked Politics, “and talk about the dirty side of how this all works.”

After her personal life was turned into a headline — and a punchline — Monica Lewinsky reached out. “She was just saying, ‘I understand what you’re going through. Let me know if you want to talk,’ ” Hill remembers.

“I just called her and she shared a bit about what some of the things that she was made fun of on Saturday Night Live,” Hill says. “It helps to know that other people, even if it’s a small crowd, have been through this kind of public shaming.”

‘The Right Thing to Do’

When she decided to run for office following President Donald Trump’s election in 2016, Hill was 29 and the executive director of a non-profit helping homeless people. She was also in an unhappy marriage to Heslep, whom she’d been with since 16, she writes in her memoir.

It was during her campaign — part of a wave of first-time female candidates — that Hill entered into the three-way relationship with her husband and the young female campaign staffer.

“I feel like my mistake was that I didn’t set the boundaries between my staff and myself, especially early on in the campaign when it felt like we were a bunch of friends working together to try and do this crazy impossible thing,” Hill tells PEOPLE of flipping a historically Republican district.

In time, Hill fell in love with the campaign aide, she writes.

Since the reports last year of their relationship, however, the two have not been in touch.

“She wants to have her own life,” Hill says. “This was really, really unfair that she got dragged into the spotlight. I think that’s one of the most  hurtful things of all. And so she’s trying to just move on with her life as much as she can.”

Throughout Hill’s marriage, Heslep threatened to “ruin her” if she left him, she writes — an alleged threat she claims he made good on after she left him months after her election in November 2018.

She blames him for the resulting leak of photos and other intimate information. Massive backlash ensued, sometimes in personal terms.

Immediately after the publication of the first photos of her on Oct. 18 last year, Hill says her staffers began receiving “horrible phone calls every day” from constituents, her family was “getting harassed” in her hometown of Santa Clarita and her police officer father drove around town “literally tearing down posters of me” that were “saying horrible stuff.”

With the threat of more photos and private texts to come after RedState and The Daily Mail’s initial publication of their articles, which included the allegation of an affair in Congress, “It just felt like this kind of insurmountable thing at the time,” she says of resigning rather than sticking it out, as some of her Democratic colleagues had urged her to do.

Additionally, Hill didn’t want to put her fellow Democrats in the position to defend her.

“At the time, at least, it just felt like the right thing to do was to take myself out of the equation,” she says of leaving office. “Part of it was listening to my conscience. I was really afraid of becoming a liability for my Democratic colleagues.”

Some 10 months later, speaking with PEOPLE from the one-bedroom apartment in D.C. that she shares with her orange cat, Archie, Hill sounds energized and upbeat. She has a full day of interviews discussing some of her life’s darkest moments and what came after, and she is excited by the change she feels she can make with her political group.

“I feel like I’m on an upward swing right now,” she says. “I have a lot of jitters, I guess, about re-entering the spotlight and  the criticism that is guaranteed to come because of that. But I feel generally happy and excited about the next step.”

That doesn’t include another run for office, at least for now.

“I will never count anything out,” she says, “but it’s definitely not in my immediate plans.”

Thu Aug 13 , 2020
Everybody loves pro skater Tony Hawk. Heck, there are numerous memes about.  Hawk’s enthusiasm for skateboarding and light teasing of his fans has solidified him as an internet darling. Now, the legendary athlete is giving everyone another reason to support him: Hawk is renaming an iconic trick in his Tony Hawk’s Pro […] 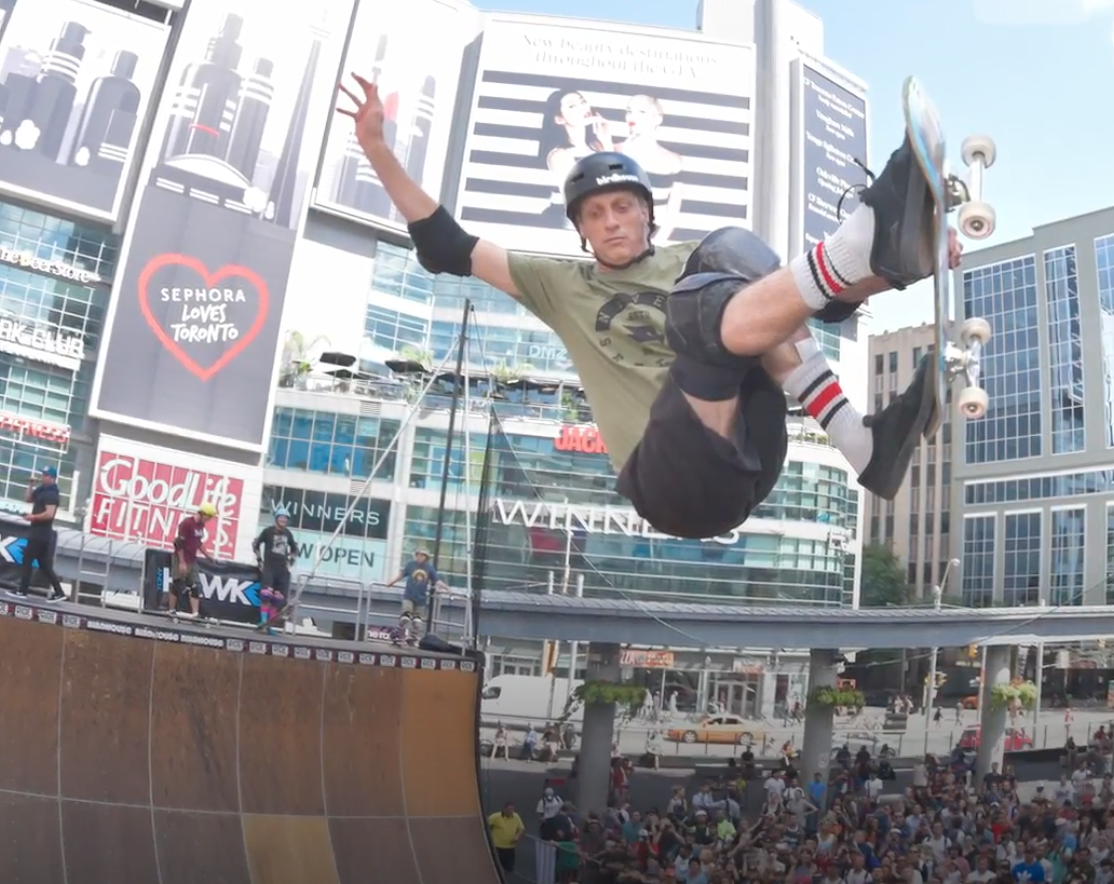