In early 2017, I watched from my desk at the CIA as the world learned Russia had waged an influence campaign targeting the U.S. presidential election months before. As an intelligence analyst, I worked in a world where countries often used covert action against each other to influence events, outcomes, […]

In early 2017, I watched from my desk at the CIA as the world learned Russia had waged an influence campaign targeting the U.S. presidential election months before. As an intelligence analyst, I worked in a world where countries often used covert action against each other to influence events, outcomes, and policies, but the scale and scope of Russia’s actions to try to help Donald Trump elected were unprecedented. As the Intelligence Community’s declassified assessment from 2017 stated, Russia’s interference was “a significant escalation” in the country’s long-running effort to undermine the United States.

Since then, I have seen this revelation lead to a (mostly) collective panic, but essentially no government action. That panic has manifested in a growing distrust of institutions we traditionally counted on for information, like the media, fear that social media conversations are orchestrated by “Russian bots,” the mainstreaming of conspiracy theories, and in the most extreme cases, people giving up on the existence of facts and truth altogether. But none of these things will solve our information problem.

Check your emotions and biases

As I write in my new book “True or False: A CIA Analyst’s Guide to Spotting Fake News,” I was trained to comb through massive amounts of information and root out the fact from the fiction to keep policymakers informed — things like investigating sources of information, checking my own emotions, examining my personal biases, and researching information before jumping to conclusions. As I left federal service in mid-2017 to hunt disinformation from the private sector, it occurred to me that this kind of critical thinking was what people needed to employ against their own streams of information.

With a global pandemic and worldwide protests against police violence, we are living in a time so rampant with false information, rumors and hoaxes that we disinformation experts call this period an “infodemic.” Emotions and stress are at an all-time high, so it is more important than ever to make sure you are not spreading false information. Based on my experience, here are some tips on how to assess a few recent examples of questionable “facts.”

At the start of nationwide lockdowns in March, rumors were running rampant on social media and through peer-to-peer messaging apps that the federal government was about to announce a nationwide, military-enforced lockdown. So when a Twitter user posted a video of a train transporting military equipment through downtown San Diego, saying, “Tanks have arrived in #San Diego,” implying it had started, the video went viral. In 24 hours, it had more than 2 million views.

This was an actual video of a real thing taken by a real person, but the context was wrong. It’s important to take the time to put aside any emotional reaction to the content and do a quick internet search for additional information. This would reveal that military equipment is transported by rail across the country regularly, including through San Diego. Also, about as regularly, people have long used videos of train transports to claim military invasions are underway to cause panic.

Doctor’s orders: Fake news about the coronavirus is hazardous to your health. Don’t fall for it.

In June, amid protests against police violence, claims spread across small towns that supposed violent protesters and members of Antifa were on the way to riot and loot. In one such claim that went viral on Twitter, a person said “6000 rioters and looters are on a bus to Notre Dame Indiana.” Investigating the source of the alleged information would have revealed the person runs an anti-science health website and was probably not a credible source to follow.

Also, the Twitter post should have also elicited a number of questions, such as: Logistically, how would 6,000 people fit on one bus? If they were on separate buses, why was there no evidence of Indiana highways overrun with the number of buses it would take to transport that many people? And why would supposed rioters even go to a small town like that in the first place?

Earlier this month, an anonymous QAnon conspiracy theorist on Reddit claimed that the furniture and home décor company Wayfair was kidnapping children and selling them to sexual predators under listings for overpriced cabinets and pillows. The claim went viral across social media platforms and when Wayfair removed the items, it only fanned the conspiracy flames. It turned out a software glitch on the website caused these items to be listed for $10,000 or more.

Avoiding hoaxes: Fake news is a test for citizens. Here’s how to pass it.

In this case, beyond having a healthy dose of skepticism about claims made by an anonymous social media account one cannot verify, it would help to research the conspiracy theory group at the helm of this charge. That would reveal that the group regularly makes claims of child sex trafficking and charges celebrities, politicians and companies with alleged involvement. However, the group has never successfully found actual victims.

The fact is, the vast majority of false content circulating online is from real people not knowing what they’re sharing is false. That is why I believe people must be a massive part of the solution to our information problem.

Cindy L. Otis, a disinformation expert and former CIA analyst, is vice president of analysis at Alethea Group and a senior non-resident fellow at the Atlantic Council’s Digital Forensic Research Lab. Her new book, “True or False: A CIA Analyst’s Guide to Spotting Fake News,” was published Tuesday. Follow her on Twitter at @CindyOtis_

You can read diverse opinions from our Board of Contributors and other writers on the Opinion front page, on Twitter @usatodayopinion and in our daily Opinion newsletter. To respond to a column, submit a comment to letters@usatoday.com.

Wed Jul 29 , 2020
Barbie has released a new 2020 “Campaign Team” set, which features a black doll as a presidential candidate. While the current US presidential nominees are both white men, toy company Mattel is hoping to nurture the dreams of young girls that they could one day become the first female president. […] 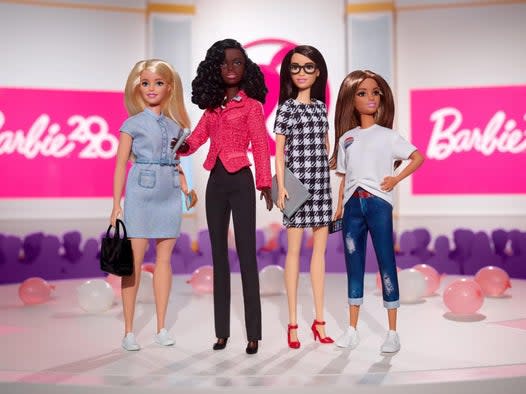